We’ve got a new pack for you, Super Awesome Sounds, featuring samples of the Casio SA-20 Keyboard. This was my first instrument as a kid and thus has a very nostalgic place in my heart, so i recently re-acquired one and went nuts sampling its 100 patches and making instrument and drum racks for ableton live out of them (plus audio effect racks inspired by them), using the amalgamation of my accumulated knowledge over the years to create the most refined PerforModule instrument pack to date.

Since it seemed to fit nicely with his existing collection which includes quite a lot of 80s- and 90s-esque sensibilities, i’ve teamed up with Brian Funk to release the pack. We talked about it as well as various other random topics on his show, the Music Production Podcast. Many thanks to Mr. Funk for having me on, always an interesting and insightful time.

There is a free version of the pack as well as the full version linked below, which can be currently had for just $6 by joining Brian’s Music Production Club this month (along with a bunch of other cool stuff). That’s a sweet deal! The MPC is a great way to acquire a constant influx of goodies into your inbox every month for a very accessible sum, so that even poor, cheap bastards like me can afford it. It’s rad! The price for Super Awesome Sounds is otherwise $15, itself a tubular deal considering the vast assortment of wonderful gadgetry it contains within.

Click to check it out at Brian Funk’s site.

END_OF_DOCUMENT_TOKEN_TO_BE_REPLACED

A new free Live pack is available at Subdivizion.
It includes a handful of midi racks which are specifically designed for use before drum racks in Ableton Live.
Especially fun stuff for live performance if you like to play drum racks with a midi pad controller.
Also very useful for hastening studio production workflow.
Click the image below to learn all the details of the specific devices and to grab the pack.
Many thanks to Subdivizion for hosting. Enjoy! 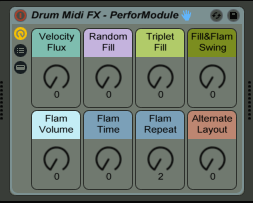 It includes 4 simple yet useful devices specifically for controlling midi dynamics, and one silly device with various fun-ctions. Click image to grab!

Midi Compressor
Smooth out too-loud midi instrumentation.
Use this like you would an audio compressor, to attenuate midi notes which exceed a certain velocity. All notes exceeding the threshold will be attenuated. The further past the threshold it is and the higher the amount is set, the more a note will be attenuated. Notes below the threshold velocity will not be affected at all.
Example usage: Playing a synth instrument melody in which notes above a certain velocity become too harsh-sounding due to a filter resonance tied to the velocity. Use the midi compressor to soften only those too-harsh notes.

Midi Expander
Smooth out too-quiet midi instrumention.
Use this like you would an audio expander, to boost midi notes which are below a certain velocity. All notes under the threshold will be boosted. The further below the threshold it is and the higher the amount is set, the more a note will be boosted. Notes above the threshold velocity will not be affected at all.
Example Usage: Trying out a melody with a different synth instrument, and the quietest notes are now much quieter than they were previously due to the new instrument’s velocity mappings. Changing the mappings or note velocities would take too much time so you just use the midi expander to lift up the quietest notes.

[Midi Compressor and Expander Special Notes: You can use Live’s “Velocity” device by itself to attenuate or boost overall note velocity; however these devices are useful for more precise and careful dynamics control, by using the threshold to set a cutoff point. Notes nearby other notes do not affect each other’s response the way an audio compressor’s transients do, so imagine them as if they have perfectly fast & noiseless attack and release.]

VelociRaptor
Set the velocity to a specific value.
Use this when you want rigid control of the velocity of an instrument, to be able to use a knob or automation to set the level at any moment to an exact setting. This overrides input velocity and all velocity effects prior to it in the chain.

Velocity RNG
Add in a bit of random fluctuation to an instrument’s velocity.
At small amounts, this will add in a bit of “humanization” and make the playback of instruments less robotic sounding. At higher settings it will vary more sporadically, until at maximum, a note of any input velocity may result in an output of any possible velocity. Tip: record a midi track with little or no dynamic variation into another midi track, routed through this device at a low setting. The new midi track will now have random difference applied to each note.

Rad-omizer
This is a rack with various tools to quickly alter a midi instrument’s input. Macros include:
Mutant DNA: adds in a random chance that played notes will instead “improvise” and play a different note. The higher the control is set, the more chance of a mutant note, and the further away from its original value it might stray.
Force Scale? Key Major … Minor?: optionally implement a scale selector to force all notes to conform to a chosen major or minor key. Niftily see the choices in the macro control’s numerical box.
High Octave+ … Low Octave+: Blend in added octave notes (Make sure the instrument you are using has enough voices enabled to cover the added notes).
Random Velocity: adds in velocity flux just like the “Velocity RNG” device.
Dynamics: the default position for this is in the middle (63.5). Turn this up to drive overall note velocity; turn it down to soften overall note velocity.