There’s some ambiguity between the terms gain, level, and trim. In general, they are used interchangeably. But sometimes they are different; for example, guitar amps often have both gain and level controls.

I won’t attempt to provide the ultimate absolute definitive official definitions of those terms.
I’ll just tell you how i tend to use them.

Since i make default ableton audio effect racks out of every VST plugin i acquire, over time i’ve come up with certain conventions for labeling the macro knobs consistently.

Check out these two plugins… one has a gain control and one uses trim. But they both do the same thing. Well, whatever—i’ll be labeling those controls as level in the default racks i’m making for them, so they’re both wrong, in my mind. 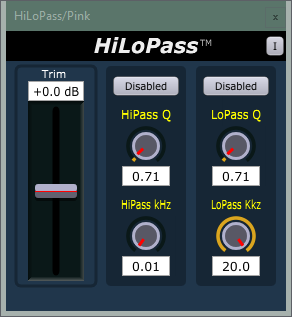 I personally like using the terms gain or drive for something which is going to alter what happens, not to simply adjust the signal level transparently. Distortion plugins often have a gain control (although this is sometimes called drive instead). If a level control is at the beginning of a plugin’s internal chain and boosting it will increase saturation, harmonic distortion, etc, i’m ok with thinking of it as a gain control. You use it to “gain” something, right? When a plugin has both gain and drive controls, drive is usually the one directly controlling the distortion amount. While an output stage on analog gear can be thought of as gain due to analog saturation and clipping, it doesn’t quite make as much sense in the digital domain to label a level control at the output stage of a plugin as gain rather than level; however, an output control which is boost-only can be called gain (like the makeup gain of a compressor). Confused yet?

I imagine a level control as one which, when you adjust it, doesn’t alter the audio in any way other than how loud it is. No frequency contouring, no distortion, etc. Usually at the output, but often at the input of a plugin as well. The point of a level fader is for gain-staging; for the input, to hit the plugin with its optimal level (for things like compressors which have reactive thresholds); for the output, to adjust the level so it is on par with the original level (useful for objective comparison). For level-independent processes (such as digital filters), whether a level control is at the input or output generally doesn’t matter because it won’t affect the end result.

Often this term is used interchangeably with level. Sometimes it is used to affect input only… sometimes it means output only. Sometimes both. To trim out the confusion i prefer to only use trim for level controls that are cut only. I see Trim as like a subcategory of level, but only for trimming downwards, unable to boost above the original level. When you trim, shave or cut away something, you’re left with less of the thing, not more, right? So if i see a macro control labeled trim on an effect rack i’ve made, i will immediately know that it can’t be used to boost the signal, only to curtail it.

So to Sum It Up

GAIN / DRIVE: adds something to the signal, saturation or whatnot. Usually at the input.
LEVEL: transparent level alteration, up or down.
TRIM: downwards-only level control. Usually at the output.

And that’s all i have to say about that (for now at least)!
See ya in a bit.

I’d like to mention that a new Isotonik Sounds instruments pack for Ableton Live 9+ i helped to make is now available via Isotonik Studios.

It’s the next in the ADM series by AfroDJMac, mega-assortments of instruments collected from his existing premium packs and grouped by theme.

I’m personally a huge fan of AfroDJMac’s work, and his early releases years ago were definitely a major inspiration in deciding to share my own custom creations and the starting of performodule.com in the first place.

AfroDJMac stuff tends on the novel side, with a nostalgic, retro aesthetic that suffuses it all with a quirky charm—which to me is much more appealing (and more my style) than mainstream, ultra-polished, “contemporary” sounds. He often makes instruments out of miscellaneous objects, one-of-a-kind acoustic instruments, and odd analog hardware, as well as using ambitiously experimental sampling and processing techniques to provide offerings which are quite peculiar while also staying pertinent in a melodic sense. I have found excellent usage from a great deal of them during audio work.

ADM BASS is a super pack of a hundred and twenty-three bass instruments, adding a seriously hefty assortment of punches to your low-end arsenal.

Check out ADM BASS, yo!

Thanks to Ask.Audio for the story on the pack!